Dazzle camouflage was a painting technique used on ships during World War I and II. The goal was to make it difficult to estimate the ship’s type, speed and direction upon initial sighting. The painted ships had the unintended effects of boosting crew morale and creating a spectacle at the docks. Massive vessels painted up like court jesters. 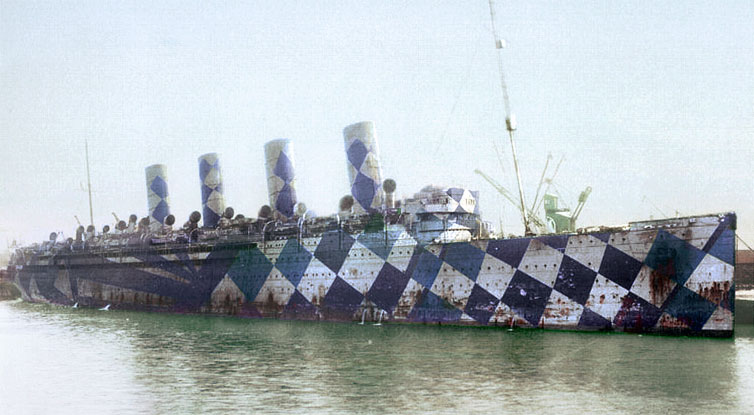 In a 1919 lecture, Norman Wilkinson explained:

The primary object of this scheme was not so much to cause the enemy to miss his shot when actually in firing position, but to mislead him, when the ship was first sighted, as to the correct position to take up. [Dazzle was a] method to produce an effect by paint in such a way that all accepted forms of a ship are broken up by masses of strongly contrasted colour, consequently making it a matter of difficulty for a submarine to decide on the exact course of the vessel to be attacked…. The colours mostly in use were black, white, blue and green…. When making a design for a vessel, vertical lines were largely avoided. Sloping lines, curves and stripes are by far the best and give greater distortion.

In 2008, the Fleet Library at the Rhode Island School of Design announced the rediscovery in its collection of 455 lithographic printed plans for the camouflage of US merchant ships during World War I. These documents were donated to the RISD library in 1919 by one of the school’s alumni, designer Maurice L. Freeman, who had been a camouflage artist for the U.S. Shipping Board in Jacksonville, Florida. Portions of the collection were publicly shown at the RISD library for the first time from January 26 through March 29, 2009, in an exhibition titled “Bedazzled.”